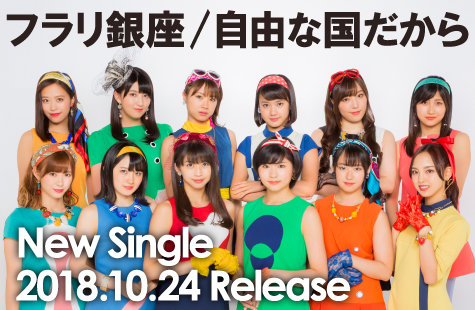 Morning Musume ’18 will release their next single on October 24. The announcement was made at the group’s 21st anniversary event at Omiya Sonic City Dai Hall.

Titled Furari Ginza / Jiyuu na Kuni Dakara, the double A-side will release in 5 editions: 2 regulars, 2 limiteds and one Special Edition. The first press of the regular editions comes with a random trading card. The limited editions include a bonus DVD featuring the music videos. The SP edition also comes with an event lottery serial number card and includes making of footage

This will be the last single to feature 10th generation member Iikubo Haruna.

The group’s profile images have been updated to reflect the upcoming release: